Your health and the health of our staff is a top priority during the Covid-19 pandemic. Classes that can safely take place with social distancing are being offered with limited enrollment. Students need to bring a mask and hand sanitizer to class. You may contact us at 319-288-0047 with any questions before registering for a class.

Relax, create, unplug,
and get away from it all! 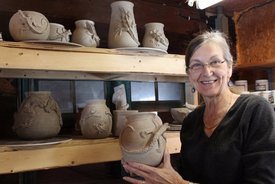 Potter and Weaver for over 30 years, Betty Printy started her career in pottery in 1971, having developed an interest in High School and pottery workshops at Iowa Wesleyan College. She is primarily self taught and considers herself a monument to experimentation. She is most well known for her signature line of Queen Anne’s Lace pottery, developed about 1986. She operates a studio and production shop which includes wheel thrown, hand built slab work, and slip cast objects located in Bentonsport, Iowa. She has done workshops and demonstrations of wheel thrown pottery in Bentonsport and throughout Southeast Iowa for many years. In 1989 she developed an interest in the Raku process and has given workshops in Raku and maintains a line of beautiful one of a kind Raku pottery pieces in her Gallery. She has operated, along with her husband Bill, Iron & Lace, a pottery and weaving studio and Blacksmith Shop for the last twenty years.  Betty has been weaving since 1986 when she bought her first loom and began the long process of self teaching. She established her studio in the Bentonsport National Historic District and began selling her fabric products. Over time, the business grew along with her pottery business. Her willingness to experiment and try new techniques has resulted in a whole spectrum of vibrant colors and patterns of fabric products including rugs, table runners, placemats, and wall hangings. She owns a weaving studio in the old Odd Fellows Hall, operates eight looms and employs three part time weavers. Finished products are on display and for sale at Iron & Lace in the National Historic District. Betty has been doing workshops in weaving of rag rugs for the last ten years, teaching students from throughout the Midwest.  She teaches Raku Potteryclasses and Rug Weaving classes throughout the year. Betty’s experimentation extends to the kitchen where she has developed original bread recipes – sour dough, whole grains and no-kneads. She also teaches the Artisan Bread Making Made Easy class. 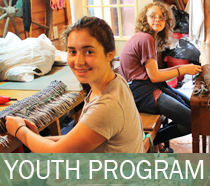 Join others as they gather in the Villages of Van Buren to learn from the resident artisans in their personal studios. Spend a weekend plein air painting along the Des Moines River, or step back in time as you throw bowls in a Pottery Shop. The inspiring and relaxing atmosphere of scenic Van Buren County, Iowa is, and will continue to be, a haven for creative beings.